There's still lots of things missing and still stuff to do but I couldn't wait to show you guys this mix of 2D & 3D as I think it has a massive potential for my future games and also should run on lower end PC's as well! (I have a GT1030 and it runs fine)

Please provide me with feedback, issues, ideas etc - all are welcome!

If you want to support me and my future games you can donate a couple of dollars using the donate button under the game, if not that's cool too. Enjoy it for FREE ;-)

Hi Psionic, Is development still progressing, or had it been paused?

Nice work, fun to play, the mix of 2D and 3D works well. Playing with the 3D objects and working with it in that mode is nice.

I never commented before, but I'm a big fan of the Ghostscape series. I really love the first part of Ghostscape 4. I hope you don't mind, but I also do gaming vids youtube, and have done a play through of the first chapter.  I can't wait for the next part, and thank you for making these games. As Ghostscape is what got me to start playing games again.

Back working on Ghostscape 4 as of next week...WATCH THIS SPACE ;-0

hi psionic. i never talked to you since the very first game i know from yours. Ghostscape 1. It reminds me it was yesterday  when in 2011 or 2010 when i played it for the first time. After Ghostscpae 2 i wanted to look who was the creator of so intrepid games. Then i found you. Amazing games more than Being one saga or the new killer escape series. Truly, to say i very liked the killer escape series that i do some kind of comic about it, obviously not to copy your work it was just for fun. Also, i want to say that i have one deja vu one time, its starts at the end of killer escape 1, that surgery door hiding another game (killer escape 2 wasnt released at that time, i asure you), i tried to think what i could find in there? And may i wasnt so wrong. Noone was at surgery but there where pods with noone inside them and many other medical supplies. But then in one of them there was a girl, and that girl was a bit similar to Abby Linthworth but her hair was black and pale skin also her face was a bit deformed, i looked closer and seconds later she started shoutind at me like she revived from some kind of deep sleep. The anecdote ends there. Also your icescape series atrracted my attention especially the second one where the music was fascinating and the mining drrilling too. Well tombscape too, natural designs amazing temples and puzzles.

mmm... and then i begun to get confusing in the story of killer escape 4, and being one 6 changed your games design at almost. Now is the turn to ghostscape 4 this goes very well it contains as you said 2d and 3d design, continue that way. Hope in future, you get lot of relevance as good videogame designer because  i see in you a lot of potencial.

Ok, the best of wishes.

Pd: I will go on design videogames at university. Bye

I am still working on stuff and have had a new idea for this game so updates will be coming soon. 19 Jan 2019

Although that first chapter was short, I enjoyed the content.   This feels like an interesting yet similar take of the old ghostscape games (1 and 2), which I appreciate as a long-time fan of the series.

Sorry, WORK has gotten in the way as I hoped to get this all done for Halloween!!

I should be back on it later this week and be posting more updates, again so SORRY!

MEANTIME BEING ONE 6 & KILLER ESCAPE 4 ARE FREE DURING HALLOWEEN

Oooh nice , did you make everything or did you use any assets from the store? if you did it all it's looking great, keep up the excellent work :)

Thanks, I make everything.

Eaaassyy!.. In fact, This is a  very cool! I was enjoyed. Old times are back. I'm waiting for the next parts!

Thanks there's still quite a bit more to add to this first part but I wanted to make it relatively easy so new players would figure it out quickly ;-)

I also think the first levels should be easy. At the beginning the game is easy, at the end game - unbearable!

Absolutely loved seeing the old point and click style return. I do feel like these puzzles were a little simplistic compared to other games.

If you would make this into a full length game with all the little things and details the previous titles had, but it being in this style, I would definitely pay some money for it!

Thanks for the feedback, I wanted to keep the first part very simple to introduce some of the 2D/3D concepts. Things will get more complicated in later levels ;-)

It will be a full length game by Halloween, I will be adding the other 3 sections over the next few weeks so keep checking back for updates!!

I will excitedly be waiting for when my email tells me that you updated the game! 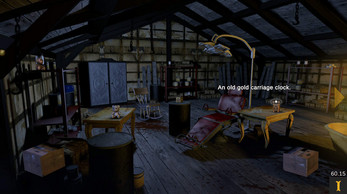 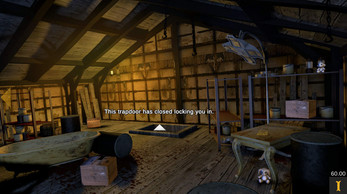